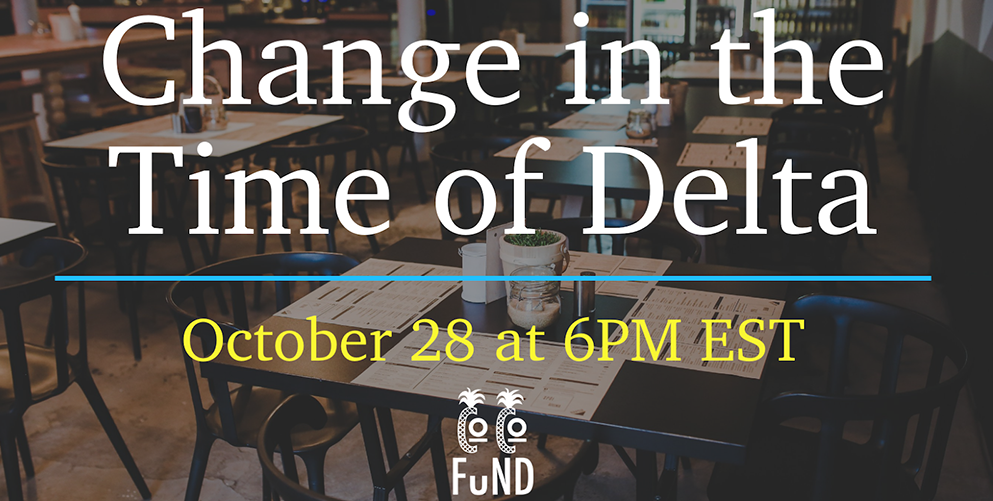 On October 28th, the COCO Fund hosted a second panel to discuss the impact of the pandemic on restaurants and its workers, especially in the time of the new Delta variant.

On October 28th, 2021 The COCO Fund hosted their second panel “Change In the Time of Delta” to discuss the issues regarding hospitality workers not returning to work. Delta, referring to the variant that continues to negatively affect the hospitality industry like COVID, was also used to represent the change both COVID and the Delta variant have caused. One of the many reasons why we hosted this panel was to discuss the miscommunication between workers, managers and patrons not wanting to return to work.

The COCO Fund specifically gathered different leaders who worked in the hospitality industry: Aiden and Louis Ardine of Unmuted Stories, who recently completed their walk across America to raise awareness and fundraise for restaurant workers across the country; Jennifer Bui of Okie Dokie Foodie, who donates her photography services to help small restaurant owners in hope of bringing them more business and spotlight on their food and establishment; and Chef Jenny Dorsey – professional chef, writer, and activist who uses food as a medium for identity, vulnerability, and social change. She’s also the founder of Studio ATAO, a 501(c)(3) nonprofit community think tank that creates tools and resources empowering individuals, organizations, and policymakers to integrate social impact into their everyday life and work. We also had the pleasure to bring back our moderator from our first panel Erika Adams, Deputy Editor of Eater NY.

One of the many issues discussed was the various reasons why people don’t want to return to the hospitality industry. A survey that was conducted by the COCO Fund and Jennifer Bui found that 32% of respondents left the industry becausethey weren’t paid enough. All panelists agreed that the issue of workers not wanting to return to work is the fact that they are underpaid, in addition to harassment, and lack of benefits compared to other jobs. Louis Ardine, who has worked in the industry in Asbury Park, New Jersey said, “I love the people I work with, but there are so many aspects to the job that are just unsustainable. It’s saddening and it’s unacceptable”. Aiden Ardine added, “It’s very one-sided in the media, on restaurant workers, that they don’t want to go back because they’re lazy, but that’s just not true.” On their walk across the United States to raise money for small restaurants, both brothers saw restaurants  struggling with staffing and are earning just enough to pay for their utility bills in rural communities where business isn’t as busy. Corporate businesses like Walmart and Mcdonalds, who have increased their minimum wages to $15 after the pandemic, are leaving smaller businesses without workers and consumers. Despite the increase of wages, they still aren’t offering workers benefits that are needed in case emergencies happen, like the pandemic. “The ironic thing is that small businesses are losing workers to large corporations that can afford benefits during the pandemic,” Aiden commented.

All of the panelists came to the conclusion that this problem wasn’t caused because of the pandemic, but has been ongoing: “These issues did not suddenly come up because of the pandemic. These are systemic issues that have been going on as long as we’ve had restaurants,” explained Adams. Issues such as consumers’ lack of empathy was also touched upon: “From a customer perspective, what can they do? Honestly, the biggest thing is empathy,” said Bui. She continued, “It’s been a ticking time bomb. For a while people have accepted the standard. We have reacted to the current situation instead of planning for this. We’ve been paying the bare minimum, providing ‘maximum profit’ for the owners with the bare minimum for the workers. We’re at this point where people understand collectively that we’re here and we’re worth it.” Chef Dorsey also proposed the idea of the government changing the wages and adding benefits: “The way that money flows, who controls capital, that does not change…if we are not going to vote for candidates who support social services, nothing will change”.